Envisioning with empathy: Reflections on the Transformative Scenario Planning Methodology

November 06, 2016
Last month, my team organised and participated in a training workshop on a methodology called Transformative Scenario Planning (TSP). Aimed at envisioning and co-creating futures in situations that are seemingly stuck, cannot be resolved by one/few actors, and are complex and conflict-ridden, the TSP has been used across the globe from post-apartheid South Africa to democratic futures across Latin America. In India, we are exploring whether we can use this methodology to construct transformative scenarios for Bangalore's water future.

How They Work: Transformative scenarios offer a way for diverse stakeholders together to unblock situations that are polarized or stuck. The facilitated process combines imagination and rigour. It is useful when a diverse set of people face a complex challenge that is vital to them but that they have not been willing or able to work on together, perhaps because they disagree on the very nature of the problem. Transformative scenarios enable them to construct shared understandings, stronger relationships, and clearer intentions, thereby creating the potential for action that will shape a better future. From the Reos Partners Website

Bangalore's water situation has been in the news for all the wrong reasons. Bangalore's lakes are polluted and frothing. The city has a thriving water mafia which has exploited groundwater within and beyond city boundaries. Real estate developers routinely build upon and along lake beds, disrupting local hydrology. Beyond the water issues, Bangalore is facing serious challenges: its population has doubled over the past decade; services from transportation to electricity supply, are severely stressed; and its under-staffed government bodies face recurring issues of fragmentation and redundancy (many departments with overlapping functions, poor policy convergence). Inequality in the city mirrors Amartya Sen and Jean Dreze's apt comment on India of "islands of California in a sea of sub-Saharan Africa" (An Uncertain Glory: India and its Contradictions, p.9).

In such a situation of complex, almost-overwhelming issues that promise to only become more acute in the future, Bangalore's Water Future is a candidate ripe for the TSP. For me, the workshop, and the journey it took us on, was an invigorating experience.

“...change or action happens when the pain is felt throughout the system.” Colleen, Reos Partners, Day 1

Takeaways from the process

“looking towards the future along with others is, in itself, a big step.” Participant, Day 2 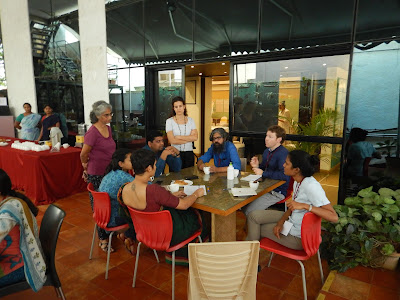